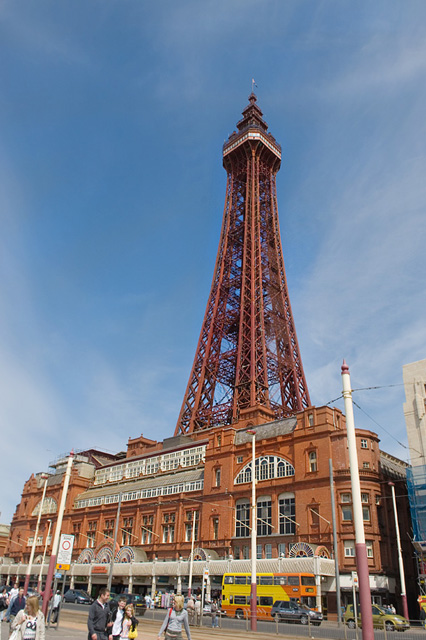 When our Same Day Couriers in Blackpool think about the town the first thing that comes to mind is the Blackpool tower. One of Blackpool’s most famous tourist attractions opened to the public on may 14th 1894, 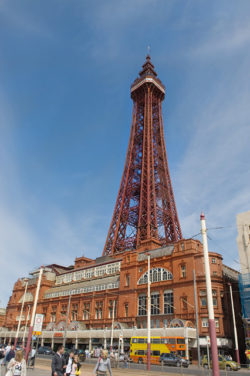 when construction of the tower was completed it was the tallest man made structure in the UK, at 518 feet (158 metres) tall it was credited as the 120th-tallest freestanding tower in the world! When the Tower opened in 1894 the huge investment in building was justified in only two years the company made a profit of £30,000!

For a truly spectacular view of Blackpool, you need to head to the top of the tower. At 518ft tall, you’ll be pleased to know that there are lifts to the summit, with a  superb panoramic view, on a clear day you can see North Wales, the lake District and the Isle of Man! If your feeling truly brave there is a glass floor at the top where you can look straight down to the streets below! …. Not sure that’s for us.

There are many stories and events that happened around the Blackpool Tower in its rich history some not so happy, did you know the top of the Tower caught fire in 1897? 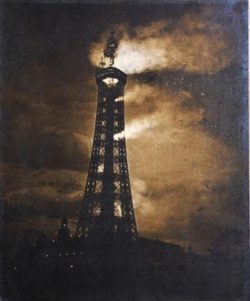 The fire could be seen up to 50 miles away! In 1894 a Norwegian ship mistook the tower for a lighthouse in a storm and ended up becoming ship wrecked on Blackpool beach, you can still see the wreck on a low tide.

During the Second World War the crow’s nest at the top of the tower was removed to allow the RAF to use it as a radar station! The Tower also likes to get involved in celebrations such as painting the top of the tower silver for the queens silver jubilee celebrations, and adding a model of King Kong on the side of the tower, even a wedding was held there when the bride and groom got married whilst being suspended in a cage from the tower!!

Ever since the Blackpool Tower opened, the Circus that sits at the base of the tower has brought endless entertainment to audiences. The Circus has Never missed a season, not even during the two World Wars, which probably kept the spirits up for the locals in such an uncertain time. The Blackpool Tower Circus is Blackpool’s longest running show opening on May 14th 1894 and still going strong today, 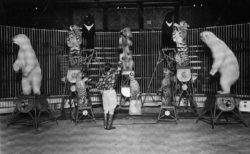 it is the oldest permanent circus arena in the world! Up until 1990 they featured wild animals performing in the ring including lions, tigers, polar bears and elephants! As Same Day couriers in Blackpool we aren’t called to deliver live animals, not sure any of our couriers are equipped to deliver lions, tigers and polar bears but someone back then must off! Stepping into this circus is like stepping back in time especially as the interior was completed in 1900 by the famous theatre designer Frank Matcham, 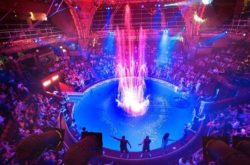 The original cages the animals were housed in are also still there to see today! The Circus performances have always ended with a spectacular water finale, the arenas unique design has a hydraulic floor which sinks and fills with 42,000 gallons of water in less than a minute!! These guys really know how to end a show no wonder the circus has been so successful so many years!

The Tower Ballroom is situated in the base of the Tower, it is full of elegant charm and refined beauty! Dating back to 1894 it was world famous for its unique sprung dance floor and grand architecture and still to this day is a place for people from all over the world to get together and dance! 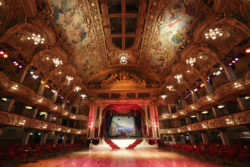 The original Ballroom was smaller than it is today when it first opened in 1894, the floor now measures 120ft by 120ft and took 30,602 separate blocks of mahogany oak and walnut! That’s some amount of flooring to be delivered. Our couriers in Blackpool are well situated if they ever need to re-lay the flooring with tail lift vehicles to make the delivery easier. Having visited the ballroom you may of noticed there are 16 composers names that are found to be around the ballroom, there is also an inscription above the stage that says ‘Bid me discourse, I will enchant thine ear’ it is from a sonnet by Shakespeare, another interesting fact about the ballroom is the large crystal chandeliers, they have been made so they can be lowered for cleaning, it takes over a week to clean them all.

The ballroom used to have very strict rules around dancing one being that gentlemen could not dance unless with a lady and any disorderly conduct would mean immediate expulsion! Did you know that dancing on a Sunday was prohibited, instead sacred music would be played.The first ever Wurlitzer organ was delivered to the ballroom in 1929, but was replaced in 1935 to a new specification requested by the organist, Reginald Dixon played the organ for many years until retirement coming back to play one more time in 1970 to mark his 40 years at the Blackpool tower! Phil Kelsall took over the duties in 1975 and is still to this day playing the organ in the ballroom! https://www.theblackpooltower.com/attractions/blackpool-tower-ballroom/

Blackpool is famous for its donkey rides, kiss me quick hats and its 3 piers along the sea front, Blackpool’s 3 piers are, North Pier, Central Pier and the South Pier, all with their own unique identity. The North Pier was opened in 1863 and it is one of the few designs by Eugenius Birch which has withstood the test of time. 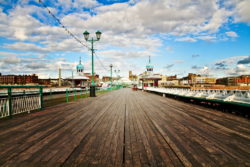 The pier is 500 meters in length and is your typical classic sea side pier, it is now a grade 2 listed structure. Its design is Victorian with an Indian pavilion and theatre. It is a very grand structure and shows the pride that the seaside had in the 19th century. This pier is slightly more refined and traditional than the other two, North Pier is where people would take a gentle stroll and breathe the fresh sea air and relax.

The Central Pier with its Big wheel can be seen for miles and is one of the most famous images of Blackpool, it is only 5 years younger than the North Pier opening in 1868, 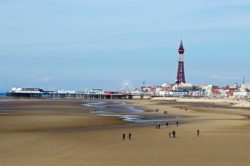 it is referred to as ‘the peoples pier’ as it offered the opportunity to go dancing, which back in 1868 was frowned upon by the middle class who preferred to walk down the pier. From then on this pier was identified as the place to go to have some fun and still is very much a family orientated with it’s helter skelter’s, dodgems slot machines and entertainment for all of the family all the way to the end of the Pier!

The South Pier originally named the Victoria Pier after Queen Victoria changed its name to the South Pier to fit with the other two, 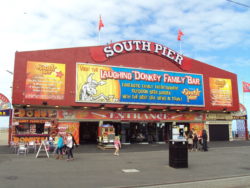 it is the smallest of the three and is also the youngest opening in 1893, similar to the Central Pier it is aimed at the fun going family, quite unlike the North Pier which stands out for its grandeur. With an indoor amusement centre it makes it ideal for those wet and windy days and has a great view of the famous pleasure beach.

The world famous Blackpool illuminations are an annual lights festival, it started way back in 1879 and is held each autumn and runs for 66 days. 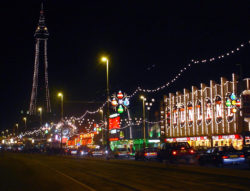 The lights cover 6.2 miles from Starr Gate at the south to Bispham in the north and uses over 1,000,000 bulbs!! I wouldn’t want that job to check each light bulb is working! There is so much that goes on at this time in Blackpool with The Big Switch On, viewing the lights, Blackpool Tower illumination, competitions and illuminated tram tours! It’s one of Blackpool’s largest tourist attractions. Our Same Day Couriers in Blackpool curse this time of year with slow driving tourists travelling the length of the illuminations!

Each year the opening night or the big switch on, is held in a specially built arena with a different celebrity pulling the switch to turn on the 6 mile long lights every year! 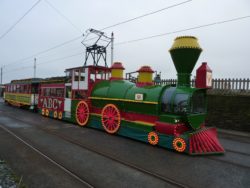 The first switch on was held in 1934 when the then Lord Derby was chosen one to turn them on, from 1993 the local Blackpool radio station have broadcasted live as the celebrity guests turn the lights on, there are performances in the Radio2 arena featuring pop bands, singers and comedians and many more fantastic things to see at this time of year in Blackpool. If you haven’t been to see the illuminations before it is definitely a must, suitable for all ages! Take a look here and find out more