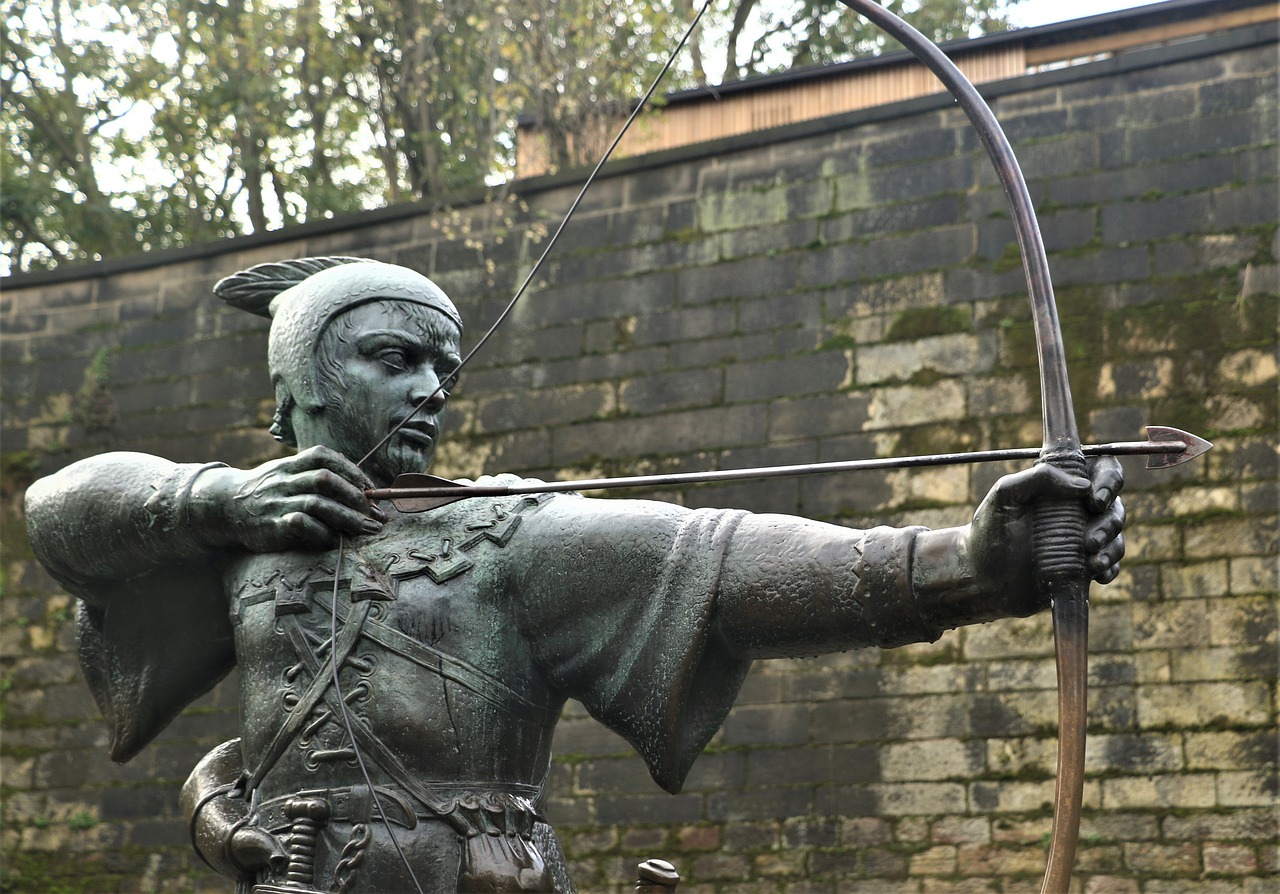 Robin Hood is a legendary heroic outlaw many people have heard of although he is not proven to of existed and has been debated for centuries. There are numerous references to historical figures with similar names that have been thought of as possible evidence of his existence with some even dating back to the late 13th century. 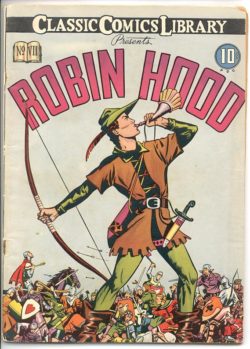 According to the legend, he was highly skilled in archery and a great swordsman, there are many different versions of Robin Hood but all tell a story about a man who stole from the rich to give to the poor. We are grateful that he isn’t around these days stopping our couriers in Nottingham in their tracks. In some versions Robin Hood was from noble birth, and in modern retellings he is sometimes thought as having fought in the Crusades before returning to England to find his land taken by the Sheriff. In the oldest known versions he is a member of the yeoman class, traditionally dressed in Lincoln green. Through many retellings and different variations of Robin Hood there have been characters associated with him such as his lover Maid Marian, his Merry men and his rival the sheriff of Nottingham. We often view our Same Day Couriers as our band of merry men here at All About Freight.

He became a popular figure in the Late Middle Ages, and the earliest known songs featuring him are from the 15th century!! The story continues to be widely represented in literature, film, and television. Robin Hood is considered one of the best known tales of English folklore,

so much so there is a Bronze statue of Robin Hood made to last 6,000 years!! It weighs half a ton and is 7ft tall and is surrounded by plaques that tell the story of Robin and his Merry men, having such a heavy and important statue delivered and placed at Castle Place would of required a specialist delivery service probably utilising a Hiab Lorry, we specialise in organising deliveries of all shapes and sizes providing the right vehicle for the job. Along with the statue there are museums and shops that sell and promote this popular character.

The Queen’s Medical Centre (QMC) was the first purpose-built teaching hospital in the UK, with 1,200 beds and an annual intake of 100 students. The build was not without setbacks as legal delays meant the building work was unable start until May 1971 and a lack of funding became a serious issue after 1979, this slowed the commissioning of some parts of the hospital. Our Same Day Couriers Nottingham are always busy delivering to sites for development such as when the QMC was being built, take a look on our website for more services we provide.

It was well into the 1970s before the project was completed. When finished the Queen’s Medical Centre was officially opened by the Queen herself on 28 July 1977, and shortly after had its first patient in 1978!! In April 2012, QMC was designated as the East Midlands Major Trauma Centre. 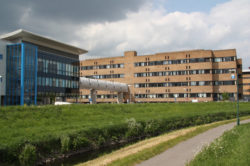 The hospital has more than 1,300 beds and employs more than 6000 people, It has a busy accident and emergency unit, and is the main stop for the Lincolnshire & Nottinghamshire Air Ambulance, for seriously injured patients. In 2016-17, there were 195,782 emergency attendances!! Having such a wide range of highly qualified doctors nurses and staff the hospital is lucky enough to have the chance to call upon the specialists for certain fields of care and treatment available. 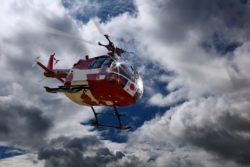 Why not visit the air ambulance website and help this amazing charity! You never know when you might need their help. We’re not in the same league as the Air Ambulance but we are often referred to as an emergency service providing same day deliveries across Nottingham.

Nottingham has well been long known for its Lace, the Lace Market area is probably one of the oldest parts of the city of Nottingham, there is evidence found from the earliest settlement near the National Ice Centre dating back to the fifth century!! 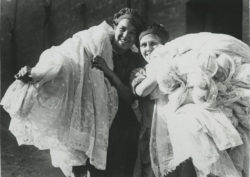 The Lace Market started in the Saxon area of Nottingham, The invention of the knitting frame was by William Lee of Calverton in Nottinghamshire it radically changed the area and eventually gave the Lace Market its name! Richard Arkwright established a small cotton mill in Hockley in 1768 and this led to the development of back to back housing for mill workers, this resulted in the high density warehouses and narrow streets that are characteristic of the area today. By the 1840s lace making was changing from a domestic industry into an international export, where couriers would collect the lace and delivery it all over the UK and overseas as the lace was in high demand. 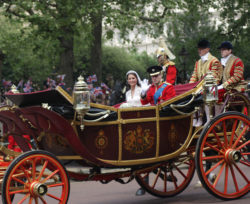 In 2012 they supplied the Royal School of Needlework at Hampton Court Palace with lace to create Catherine Middleton’s Royal Lace Appliqué for her veil and shoes!! Why not visit the museum to see first hand how this amazing industry became to what it is today!

Nottingham Forest Football Club were formed in 1865 moving to the City Ground in 1898,

The first official football match took place on 22 March 1866 against Notts County, who were formed in 1862. Between 1977 and 1978, Nottingham Forest set a new record of 42 consecutive league matches without defeat!! Forest went on an astonishing unbeaten run which was only ended by a 2-0 defeat against Liverpool on 9 December 1978.

At their home game against Birmingham they were presented with the Championship trophy for the first time in their 114-year history in front of 37,625 supporters at the world famous City Ground. The unbeaten record would go on to stand for 26 years before Arsenal become the new holders. Although not playing in the league Forest’s 17-year old keeper Chris Woods played an important part in Forest’s League Cup run, At 18 he became the youngest goalkeeper to play in a Wembley final. And he won his medal in the replay at Old Trafford when Forest lifted the League Cup.

Forest went on to win the European Cup twice under the legendary Brian Clough in 1979 and the following year in 1980. How we would of loved to of couriered that trophy back to Nottingham.

The club have been given the green light for an exciting re development under the current new owners! The new facilities will include a museum, a new club shop, range of hospitality lounge options and restaurants and executive boxes. 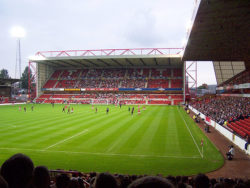 There will be new spacious concourses for general-admission supporters as well as improved facilities for supporters with disabilities and a substantial increase in wheelchair spaces.

With our director a huge Forest fan the club are close to our hearts and our Same Day Couriers Nottingham are always ready and waiting to collect. If you want to find out more about the club check out https://www.nottinghamforest.co.uk/

Victoria Centre is a shopping centre at the heart of Nottingham, With over 120 stores including top brands such as John Lewis, House of Fraser, Next, Topshop, Office and River Island! 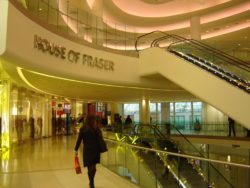 Victoria Centre has opened the Clock Tower dining which has lots of great restaurants to choose from after working up your appetite from all of that shopping! If your stuck with large items then give us a call and one of our Same Day Couriers Nottingham can come and collect for you.

Victoria Centre is the place to shop in the East Midlands and has easy access to get to with plenty of parking, buses and trams! It’s also only a short walk away from their sister centre intu Broadmarsh, located at the South of the city centre. 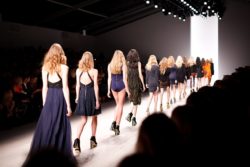 There is always something going on at Victoria Centre such as fashion shows to free holiday activities for the little ones, student nights and quiet hours for people who struggle with noise! Victoria shopping centre have thought of it all.

With shops already setting out there Christmas items it won’t be long until the shops get busy with Christmas shoppers, Victoria shopping centre is probably the best place to go with so much variety you could do it all under one roof! If find you have brought to much to carry our same day courier service can collect your shopping from you and deliver to where ever you may be staying so you can either carry on shopping or relax without all the extra bags in the Clock Tower dinning.