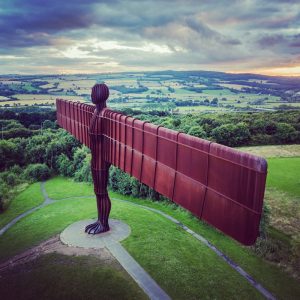 Angel of the North

As a Same Day Courier Newcastle our drivers see the Angel Of The North on a daily basis, as you drive over the hill on the A1 as it looms in the distance and they know they are not far from Newcastle! The Angel was designed by Antony Gormley. The enormous sculpture stands at 20 meters tall and has a wing span of 54 meters! The Sculpture was built out of steel and based on a cast of Antony’s own body. Work started on the sculpture in 1994 and was completed in 1998 at a whopping cost of £800,000… largely funded by the National Lottery. Due to the angel being open to all types of weather it was built out of weather resistant steel, it also had to be wind proof, this meant when constructing the Angel it needed 600 tonnes of coåΩncrete poured to anchor the sculpture to rock 70 feet down. The sculpture was built at Hartlepool Steel Fabrications Ltd and when finished was moved by road in 3 separate parts, the body and two wings. It was transported in convoy down the A19 by a 48 wheel trailer, maybe in the future we could do a same day delivery in the Newcastle area for another of Antony’s amazing sculptures! According to Antony Gormley himself, the significance of the angel was three-fold: first, to signify that beneath the site of its construction, coal miners worked for two centuries; second, to grasp the transition from an industrial to an information age, and third, to serve as a focus for our evolving hopes and fears. It certainly stirs emotion for everyone who see it! 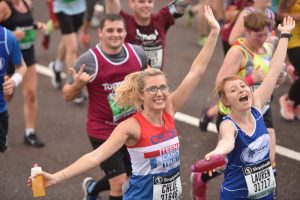 We get to travel around some amazing places as a same day courier, Newcastle is one of them, the city of Newcastle hosts many events such as The Great North Run, an amazing event full of encouragement and support to the dedicated runners that take part, it is a half marathon which is 13.1 miles long starting from Newcastle city centre heading to the coast in south shields. Thousands of people come to this event each year either being elite runners, fun runners or supporters and volunteers, it was estimated last year that 43,000 runners attempted the distance. There have been many celebrities who have completed the Great North Run Ollie Murs, Ross Noble, Scarlet Moffatt just to name a few. Olympian Sir Mo Farah has ran and won the event in an amazing time of 59 minuets and 26 seconds… The average time to run the race is 2 hours and 12 minuets! Perhaps when we have same day deliveries that are going that way we should give them to Mo to deliver for us! 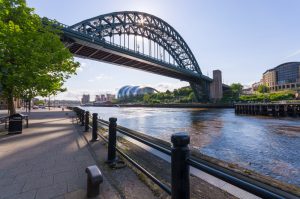 The Tyne Bridge connects Newcastle to Gateshead and crosses the River Tyne as couriers in Newcastle we are crossing the bridge daily, it was designed by Mott, Hay and Andreson, and took three years to build the 531ft and 7,112-tonne steel and granite structure. The current Tyne Bridge was opened on 10th October 1928 by King George V the original bridge built connecting the two cites was constructed by the Romans… even the Romans used same day couriers crossing over the bridge from Newcastle to Gateshead like us but probably used a horse and carriage instead! The Tyne Bridge is an iconic structure within the area and features on many marketing brochures for the area, it was built by Dorman Long and Co. the company are famous for having the first female member of the Institution of Civil Engineers, Dorothy Buchanan. The bridge has been used to celebrate a number of events in the City, the Olympic rings were fixed to the bridge to celebrate the Olympic football being held in Newcastle, the rings weighed a whopping  4 tonnes! Other celebrity events are constantly happening on the bridge such as Bear Grills zip wiring from the top of the arch down to Gateshead quayside! 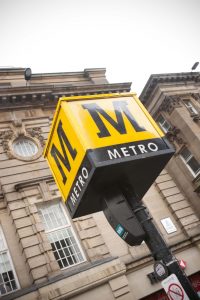 The Tyne and Wear metro also known in Newcastle just as the Metro opened in 1980 and is considered to be the world’s first electric urban railway. The Metro has two lines with a total of 60 stations, 9 of the stations are underground. In 2017/18 over 36 million passengers used the metro system! As a courier we are used to transporting our goods via more conventional methods. The Tyne and Wear line is powered by overhead electric lines and it’s the last rail network in Britain to use this way of operating. The Metro’s much needed upgrades are under threat with the worry of Brexit, the fear of the drop in the pounds value could cause ‘significant threat’ for the price of a new Metro fleet. Lets hope Brexit does not affect the Metro as it is a way of life for the people of Newcastle to travel get in and out of the city! You can find time tables and the latest news about travel here on https://www.nexus.org.uk/metro .In similar vein to the Metro we run like clock work collecting and delivering around Newcastle to your time table. For all of your requirements in the North East give us a call on 03300417079. 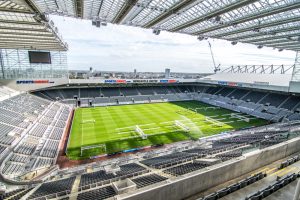 We’re avid football lovers here at All About Freight although we follow the red half of Nottingham, with St James park being the 7th largest football stadium in England able to seat 53,288 people! We have watched plenty of games played here. St James park is the home of Newcastle United since 1892, The football ground was originally just a sloping grazing land. The stadium now follows the black and white colours of Newcastle United also known as the “Magpies” United used to actually play in red and white until 1904. The stadium has under gone many expansions over the years, the latest upgrade was completed in 2000 costing a staggering £43 million! The main entrance now has lifts and escalators behind an impressive glass atrium, with one stand having 4 concourse levels, as a  structure the stadium is so prominent you cannot miss it when you visit the city centre with its glass and steel construction. The stadium was recently used for the 2015 Rugby World Cup hosting teams such as Scotland and South Africa. Newcastle Falcons have also started playing some of their home matches at the stadium making full use of the huge capacity of over 52,000 seats.

Newcastle United have been back in the Premier League for last 3 years of the competition after recent relegations, as of May 2016 they have spent 85 seasons in the top tier and have never dropped below the second tier since 1893 when they joined the league. Newcastle United have the 9th highest amount of trophies, their most successful period was between 1904 to 1910 when they won an FA Cup and 3 of their
First Division titles. If you ever forget your match ticket we can organise a same day collection and have one of our Same Day Couriers collect and deliver to you so you don’t miss your match!