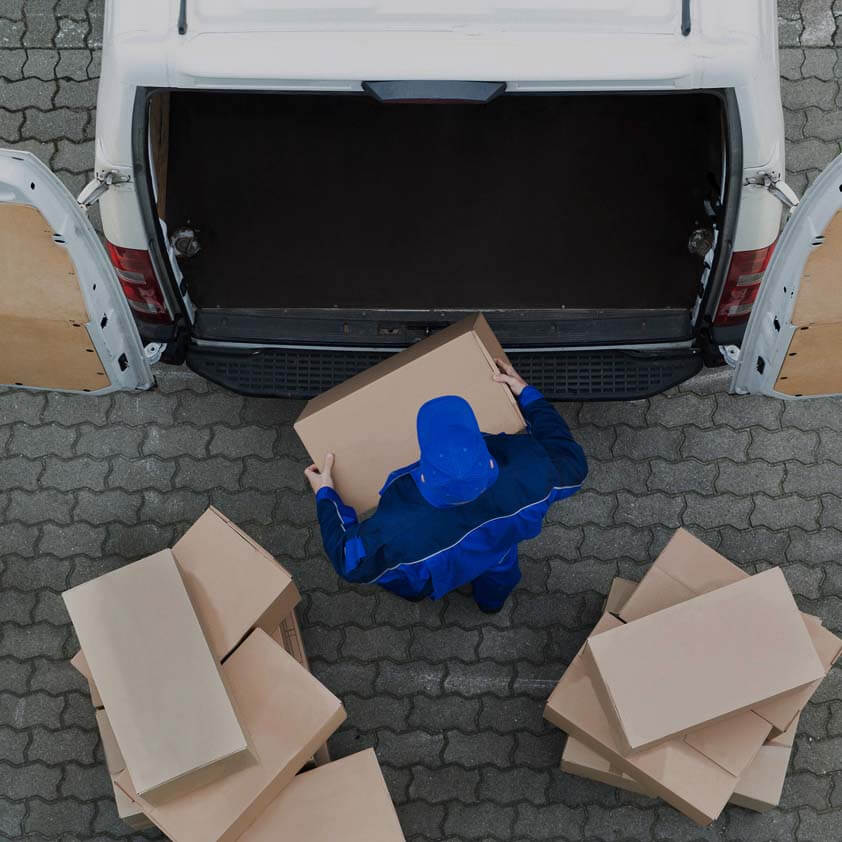 As a same day courier company in London we have to be up to date on the congestion charges in and around London, London congestion charging has been in place since 2003 and still remains one of the largest zones in the world! It applies Monday – Friday 7 am to 6 pm, but 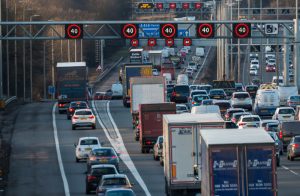 Weekends, Bank holidays, Christmas and New Year are exempt, It is a standard charge of £11.50. On 8th April 2019 the ultra – low Emission Zone was introduced which is 24/7 for vehicles that do not meet the new low emission requirements it has an additional cost of £12.50 on top of the original £11.50! If not paid there are instant fines between £65- £195!! so definitely not worth risking it. 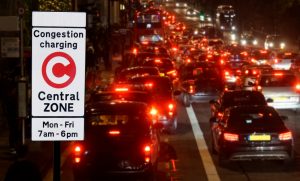 There are some exemptions how ever such as all electric cars, some plug in hybrids and any vehicle that emits less than 75 g of CO2 and meets the Euro 5 standards for Air quality. More changes are to come in 2021 where the Ultra Low Emissions zone will be extended to the north and south circular, the enforcement of the charges are by automatic number plate recognition. For more information on the charges have a look at the website https://tfl.gov.uk/modes/driving/congestion-charge. When pricing a same delivery in London we always discuss the additional charges to our customers.

Did You Know – during the first 10 years of the zone being in place traffic entering the zone reduced by 10% and gross revenue reached approx £2.6 billion!! Between 2003 and 2013 approximately £1.2 billion has been re invested in public transport in London, improving the bridges and roads in and around London, benefiting all forms of transport.

Our Same Day Couriers In London know the London Airports all to well with the London airports becoming a daily destination for us at All About Freight. Our customers are varied and range from AOG (Aircraft On Ground) deliveries requiring urgent spare part deliveries to repair grounded aeroplanes through to missing passports or visas inadvertently left at home by travelling passengers. London has six international airports and several smaller airports, the main ones being Heathrow, Gatwick, Standsted, City and Southend. Together they are the busiest airports by passenger numbers, the six airports combined in 2018 had 177,054,819 million passengers pass through their doors!! London handles over 60% of all the UK’s air traffic. Imagine all the lost property that the Airports have to handle each day with the amount of people going through, we know its a lot! … as it keeps our same day couriers busy! If you ever find yourself at the airport and realise you have left anything important at home or the hotel then give us a call, we can have a courier collect within 45mins and deliver to you so you don’t miss that plane. 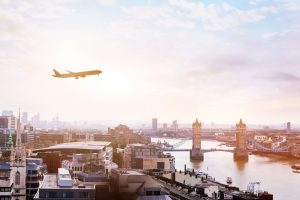 Did you know – the top 5 busiest destinations from the UK are :

London City Airport is one of the smallest London airports closest to central London it only has a single runway restricting flights to only small aircraft. Most people who use it are for business travel around the UK.

Heathrow Airport is the largest of London’s airports, it is so busy it often struggles to keep up with the demand and as a result has been rated as one of the world’s worst airports. After many attempts to expand Heathrow they have managed finally get approval by the government in 2016 to expand.

Luton comes in 3rd closest to central London and has two airlines that supply most of their flights, they are the low cost carriers … Easy Jet and Wizz Air.

Standsted is the largest operational base for Ryanair which is Europe’s largest low cost carrier and the worlds largest international airline. It is also home to Harrods Aviation allowing VIP aircraft’s to land there, such as Air Force One carrying the president of the United States.

Southend  is based in Essex and claims it only takes 15 minuets to go through arrivals from plane to train with hand luggage! A common job for our London same day couriers going to the Airports to collect passports, tickets or lost luggage, it is very common so if you find your self in a situation where time is of the essence give us a call and we can arrange a driver to be with you asap! 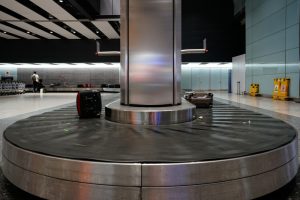 The M25 is a route we often have to use with our same day couriers in London, it is 117 miles long circulating all of greater London. If you kept at a speed of 70 mph on the M25 (which would be rare) it would still take you 1 hour 40 minutes to get around it. It is one of the most important roads in Britain thus making it the busiest too. 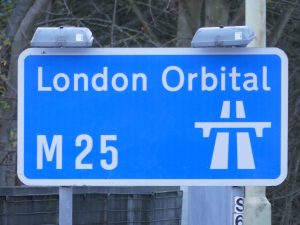 It goes through 5 counties which are Kent, Sussex, Northampton, Hertfordshire and Essex. Many junctions were built to allow access to businesses close by, also serving local offices and retail centres. The M25 has always struggled with the high demand of vehicles utilising its path and has been widened a couple of times to help with the volume of traffic but still needs further developing to ease the constant congestion through peak hours.

Did you know?  The M25 is the most accident prone road in the whole of Britain, stacking up an accident total to over 7650! 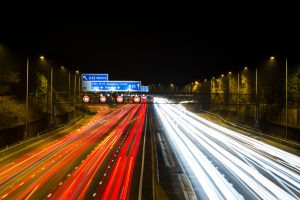 Not only is it the most famous motorway in the UK, but it was the first motorway to be built whilst considering the environment and noise pollution. Mounds were built alongside it to reduce the noise made by the millions of vehicles it carries, but also over 2 million trees and shrubs were planted to help the wildlife regain some of its previous inhabitants which also acts as a “green Eco blind” to hide the view of its existence. If your in need of an urgent delivery in and around London and require a Same Day Delivery then give us a call and we can organise a courier to get your shipment delivered, anything from a small van through to an artic lorry.

The London underground is a fascinating place transporting over 5 million passengers a day. It is not a transport we use at All About Freight for our same day courier service but is used by many and a key part of the London Transport network. It was the first underground passenger railway to be built in the world, first opening its gates to the public in 1863. Over time they have expanded and introduced a further 11 lines to its destinations.

Did you know? The underground was used in the war as air raid shelters for civilian access. On the 3rd March 1943 the underground tested out their air raid sirens with that resulted in a catastrophic outcome. 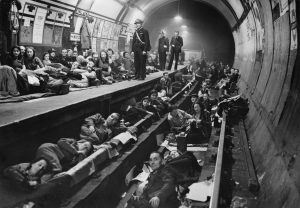 During the sound of the sirens the public panicked and in one go all rushed to the underground for safety and refuge. During the panic the gateways could not take the pure mass numbers of people trying to get through resulting in many deaths and injuries. So much so that a total of 173 people were killed including 62 children and many more injured. Originally before the tube was further developed the only way onto the platforms was from accessing a lift to go “underground”. They were manned at all sites and some stations were that small the ticket office was situated in the lift itself.

Did you know ? The deepest station is Hampstead Heath on the northern line, which was built over 58 metres underground. That’s over 13 London buses stacked on top of each other!

Our same day couriers drive over the River Thames quite often but i’m not sure they all know or understand how important the river is to London.

The River Thames is an iconic piece of London and is the reason London thrives as it does today, the river has been used for many years to courier goods up and down the 215 mile long river was key to the industrial Revolution and the building of the city as it is today, the river has also played many other important parts in our history and development such as being used as a boundary back in the pre-roman age which was used to separate two tribes, it is also a source for fresh water and food and more recently a leisure facility for tourists and sports.

Did you know – Two thirds of London’s drinking water comes from the river Thames! The river water once wasn’t clean enough to drink back in 1858 the sewage would be dumped into the river causing ‘The Great Stink’ it was so bad parliament had to be suspended and a sewer system put in place for London, much it is still used today. 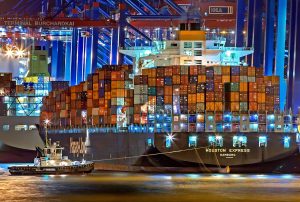 The largest ship to Sail on the river Thames was 1,300ft long 180ft wide and could carry 15,500 containers!! it is the second largest container ship in the world! London has a huge network of courier services big or small, we at all about freight also do shipments overseas and send large shipments by sea freight.