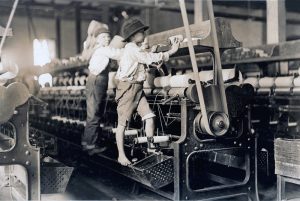 As a Same Day Courier Manchester we like to expand our knowledge on the areas we cover with our same day courier service and look back to how history created what we see today, Manchester was well known for its Cotton Mills and became known as “Cottonopolis” at the beginning of 19th century, the first cotton mills dated back to 1783 and were then powered by a water supply, during 1790 at the start of the industrial revolution steam driven machinery took the place of the water driven machinery which had a significant impact on the cotton spinning. By 1802 there were more than 50 mills in Manchester.  The canals in Manchester were used to courier the raw cotton to the mills, the mills at this time employed mainly women and children to do perform jobs such as cleaning, most of the jobs where either semi or non skilled roles the children could easily perform. The children where subject to long hours of work and also a great deal of abuse from the ‘masters’. If you’d like to take a look and see what it was like for the women and children to work in the mills visit the science and industry museum We hope the couriers in Manchester don’t feel the same way as these cotton workers did about their masters with long hours and no pay.

In 1833 the then government passed a Factory Act to improve conditions for children working in factories. The legislation brought in meant no children under the age of 9 would be allowed to work. In the early 1970’s multi story woollen mills where built. Two massive mill complexes began construction in Arncoats Manchester, they were built by two entrepreneurial Scotsmen Adam and George Murray. The buildings where 8 stories high and had rows and rows of weaving and spinning machines which were powered by a steam engine. The multi-story buildings become one of the country’s largest cotton mills, the cotton was then at the

Exchanges Trading Hall otherwise known as the Free Trade Hall or now the Royal Exchange, the exchange hall was rebuilt 3 times and at one point was the largest trading room in the world! I bet in those early days they could never imagined the hall being used for a Punk concert with the Sex Pistols performing there in 1976. 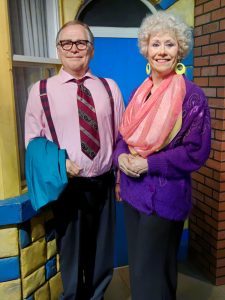 When our Same Day Couriers have some down time from their urgent deliveries some of them like to catch up on the soaps on TV, one of their favourites being Coronation Street filmed in Manchester at Granada Studios. Coronation street also known as ‘Corrie’ it has been on our screens since 1960. Corrie is a British soap opera and is based on a fictional town in the inner-city of Salford Manchester. Corrie has become the longest running soap opera and in 2010 it was inducted into the Guinness World Records as the longest running TV Soap Opera, quite an accomplishment! The show used northern dialect in the scripts such as ‘eck!’ and ‘ey chuck’ which was unusual for TV programmes in the 60’s, but soon became widely heard and loved on British TV as the soaps viewing figures increased. … there are only certain weekends the tour is open as it needs to fit around filming … don’t panic if you forget your tickets on the day we can organise a same day courier to get them delivered directly to you. If you’re a bigger fan of the show than out couriers then plan a day trip to Madame Tussaudes in Blackpool which has a fully working Rovers Return bar where you can drop in and have a few pints with the cast! 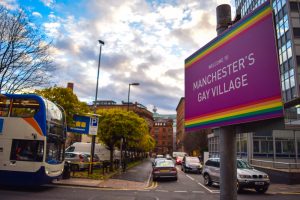 As a Same Day Courier in Manchester we collect and deliver all across Manchester, often being called by a number of tourists who have visited Manchester after they have left behind items at their hotel or B&B, one of the big tourist areas is the well known Canal Street in the centre of Manchester. Canal Street in Manchester is lined with gay Bars and Restaurants that in the warmer months the area is flooded with people, often gay and lesbian tourists from all of the world. It wasn’t until the 20th century that Canal street was associated with gay people, before then the area was known for its cotton mills by day and a red light district by night. By the 1950’s the area had declined greatly as the need for the canals to courier items to the factories became a less popular way to transport items, the introduction of the rail and early road networks made the canals almost redundant. As same day couriers in and around Manchester we are obviously grateful for the improvements although the canal workers at the time were more rueful. With the decline in activity along the canals the area became a perfect place for gay men to meet as it was dark and unvisited. During the 1950’s it wasn’t acceptable’ to be gay person and people were persecuted because of it. The Chief Constable of Greater Manchester at the time was thought to of encouraged his officers to stalk the areas around the canal at night, when questioned about this he said he was just enforcing the law on sexual activity in public toilets. As views started to changed towards the community one of the first gay bars called Manto opened on Canal street in 1990, the owners where sick of having to knock on doors and hide inside because they were gay so they brought a garage repair building and replaced the front with large plate glass windows. This was a bold and brave move, It was a huge statement to say “we’re here, we’re queer – get used to it”. But Manto lost money for the first 6 months because of fear people had to be seen in there. This did not last as over the next 10 years more bars and restaurants opened along the canal, making canal street the most successful gay village in Europe!  Some of us at All About Freight have enjoyed more than one night with friends on canal street, mentioning no names but one of us has been seen on stage dancing with a feather boa! 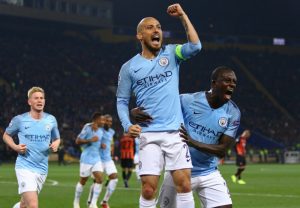 At All About Freight we know our Same Day Couriers loyalty is split when it comes to watching football, and Manchester City and Manchester United are two of the teams which cause the most banter and discussion. Manchester City compete in the English Premier league playing at the Etihad Stadium. The club formed in 1880 as St.Mark’s West Gorton and then in 1887 it was Ardwick Association Football Club then finally Manchester City in 1894. Manchester city entered the football league in 1899 and won the FA Cup in 1904 followed by success until 1981 where the clubs performance went down hill. After significant investment from the Middle East the club regained their Premier League status back in 2000. The club has since won the premier league in 2012, 2014 and 2018 and has some famous fans such as the Gallagher brothers of Oasis fame… 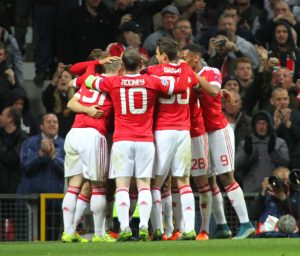 Manchester United football club are a professional football club in Manchester known simply as “United” by most fans or the Red Devils were formed in 1878. The club became Manchester United in 1902 and has a stadium in the Trafford area of Manchester. Manchester United also compete in the English Premier League, They have won the most trophies out of all the English football clubs, and have won  21 FA Community Shields, 20 League titles,  5 League Cups, 12 FA Cups They’ve also won FIFA Club World Cup! and many more!! Find out more on the official Manchester United web page for up coming games https://www.manutd.com/ Until recently they were managed by arguably the greatest club manager in Sir Alex Fergusson, until his retirement they were one of the most formidable teams in the World. Since his departure fortunes haven’t been as kind and a number of managers have come and gone! Currently being managed by an old boy Ole Gunnar Solskjaer we wait and see if their fortunes can be revived. If you’ve won to many Trophies like Manchester United and there are too many for you to carry, we can sort you a trusted courier to deliver your precious cargo safely follow our link to find out more about our same day courier service. 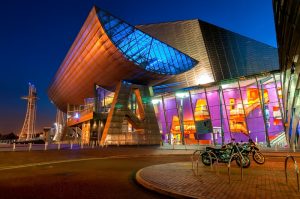 The world famous Lowry theatre is situated at Salford Quays, Greater Manchester, The Theatre opened on 12 October 2000 by Queen Elizabeth. It is a very popular theatre, it was Greater Manchester’s most visited tourist attractions in 2010-2011. The theatre is named after the 20th century painter L.S Lowry, Lowry’s paintings where known for his industrial scenes of the north west of England. The building was designed by 2 architects in 1990 unfortunately one of the designers died not long after the project began so the other continued on with the project. Funding was realised by 1996 and The Lowry Trust became responsible for the project. The project cost a whopping £106 million and was completed in 1999. The Lowry have an ongoing investment yearly of £5 million to improve the facilities and reduce the environmental foot print, Many things have had to change from major structural changes to decorating the bar with a tree with leaves made out of cotton to symbolise the cotton industry Manchester was so well known for. The gallery some 2000 square meters of gallery space includes approx. 400 of his woks in oil, pastel and watercolours from all periods of his career. With multimedia taking a more prominent part in the visitors experience encouraging more participation and interaction with the works. At the core of the theatre there are two theatres and a drama studio. If the artwork inspires you to have similar works on your wall at home and are in need of some specialist transport to get your artwork home please give us a call on 03300417079 as we have all sizes of vehicles, all fully insured to enable us to courier your artwork home.